Politics
CPN-UML makes most of elections, leaves NC to lick its wounds
The Times of Everest
6 years
0 Comment 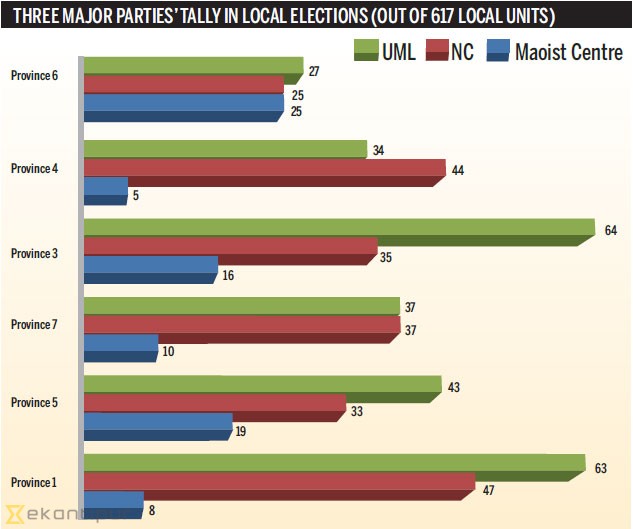 With more than 40 percent seats in its favour in the second phase of local elections, the CPN-UML has left the Nepali Congress and the CPN (Maoist Centre) behind, and set to hold sway over local governments.

Unlike what was believed, the UML won even in Kailali, Bardiya and Dang districts where there is dominance of Tharu community. Similarly, the party has performed well in Rupandehi, Banke and Kapilvastu districts where the population of Madhesi is significant.

Political analysts say the UML did well in selling its “nationalist” agenda and kept the party organisation strong.

A huge voter turnout—over 73 percent as per the Election Commission’s estimate—also meant a large chunk of votes went to the UML. Experts said this could be because of the fact that the Tarai-Madhes region, where half of the country’s population resides, is not a monolith and that a sizeable population of non-Madhesis and non-

Tharus also resides along the plains. The UML managed to strike a responsive chord with many voters with its “nationalist” agenda, they said.

The other factor that could have handed quite a good number of seats to the UML on a platter is Rastirya Janata Party-Nepal’s decision to boycott polls. And the NC’s leadership failure simply meant UML’s recipe for success, said Acharya, who closely follows the Congress party.

“The Congress fared well in Sunsari and Morang because of leaders like Shekhar Koirala and Mahesh Acharya,” he said, hinting at leaders’ individual strength. Out of 12 local units in Sunsari, the NC has won six seats. “The NC has lost its hold in districts like Dang due to monopoly of leaders like Khum Bahadur Khadka. The UML won in Kailali and Kanchanpur as well where the NC used to hold sway,” added Acharya. “The Congress failed to reach out to the people to establish its agenda.”

According to Acharya, the Rastriya Prajatantra Party (RPP) faced the biggest setback in local elections with one win in the first phase and four wins in the second phase. The biggest victory for the party is Nepalgunj Sub-Metropolis where Dhawal Shumsher Rana registered a resounding victory to become the mayor.

EC all set to update electoral roll from...
6 years