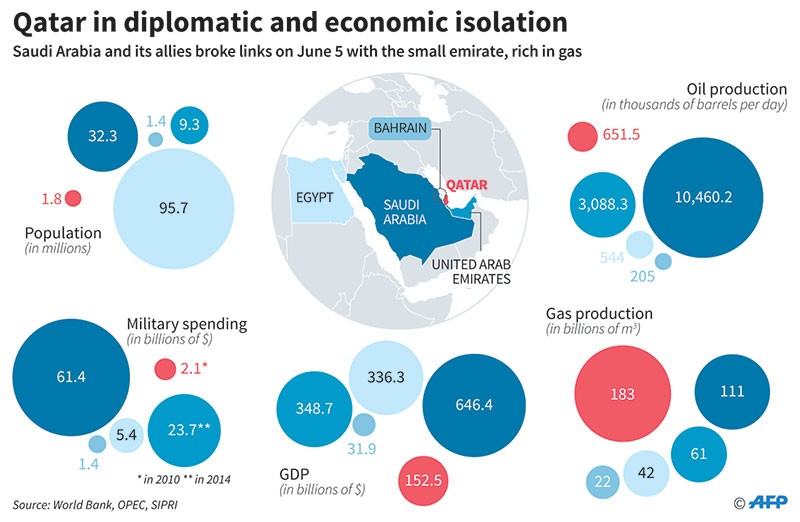 Following a diplomatic row between Qatar and the Saudi Arabia-led coalition, ambassadors from the Gulf countries have started lobbying with the Nepal government in their favour at a time when the security of millions of Nepalis working in these countries becomes a major concern.

The diplomatic pressure from the divided Persian Gulf has put Nepal in a fix as large numbers of Nepali migrants are working in Saudi and the United Arab Emirates, which have formed an alliance with Bahrain and Egypt against Qatar.

Nepal has been urging both the sides to find a peaceful way of ending the crisis in order to avert any kind of difficulty for millions of Nepalis employed in the Arab world.

A week after Qatari Ambassador to Nepal Ahmad Jasim Mohammed Ali Al Hamar held talks with Deputy Prime Minister and Minister for Foreign Affairs Krishna Bahadur Mahara, three envoys from Saudi Arabia, Egypt and the UAE jointly called on Mahara on Thursday and briefed him on their move to isolate Qatar.

The envoys handed over a joint diplomatic note to DPM Mahara explaining why the isolation of Qatar was a right move, clarifying that they were not against the Qatari people but against the policy of the Qatari regime. They also criticised the role of the Al Jazeera television network in “supporting terrorists, Islamism and trying to impose a type of democracy in the Gulf region”. The current policy of Qatar is against the spirit of the Gulf Cooperation Council, they said in the note.

Indirectly, the sought Nepal’s support for their action against Qatar, said an official who participated in the meeting. They also accused Iran and Turkey of supporting Qatar and promoting terrorism in the region. The four countries cut diplomatic ties and severed air and land transport links with oil-rich Qatar in early June.

According to a Foreign Ministry statement, Egyptian Ambassador Baher Nabil Abdelfattah Helmy accused Qatar of providing financial assistance to Muslim Brotherhood and protecting terrorism. He said that people in the region were also against Al Jazeera, a global  television network headquartered in Doha, Qatar.

Saudi Ambassador Abdulnaser Hussein Al-Harthi assured DPM Mahara that Nepalis working and living in Saudi, Egypt and UAE are safe and unaffected by the recent incidents in the Gulf.

Without voicing support for any rival camp, DPM Mahara told the visiting envoys that Nepal’s primary concern is the security of its nationals working in the Gulf, besides a secure working environment for them. Mahara stressed negotiations to end the crisis peacefully.

“We don’t support any kind of confrontation. So our best suggestion to our friendly countries is to sit and find a peaceful solution to the crisis while affirming that Nepal denounces any form or manifestation of terrorism.” Mahara said Nepal’s diplomatic ties with any Gulf nation would not be affected by the escalating tensions.