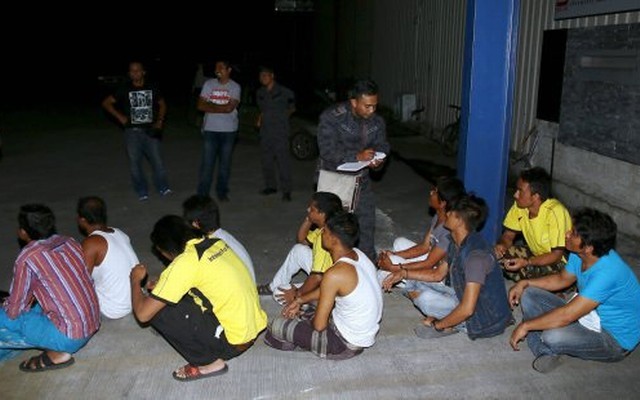 Nearly 150 Nepali workers have been arrested in Malaysia since the authorities launched a crackdown on foreigners working without valid work permit, the Nepali Embassy in Kuala Lumpur has said. The deadline for permit renewal had expired last Friday.

Earlier, the government had set July 30 as the deadline for registering at the Immigration Department.

This move will affect a number of Nepali migrants working in Malaysia, said Kumar Kharel, Deputy Chief of Mission of the Nepali Embassy in Malaysia.

According to the latest data released by the Immigration Department of Malaysia, nearly 100,000 out of the total 485,000 Nepalis currently working in Malaysia are working without valid work permit. The Malaysian authorities estimate there are nearly 600,000 undocumented foreign nationals in the country.

Last February, the Malaysian authorities had announced that the undocumented foreign workers could register themselves at the Immigration Department and apply for an Enforcement Card (E-Card) that would allow them to remain and work in the country.

“Nearly 1,400 Nepalis have registered themselves with the Immigration Department,” said Kharel. “We have called on Nepalis working illegally here to come out of their hiding and return Nepal.”

The Malaysian authorities have arrested more than 1,500 foreign illegal workers, including Nepalis. Kharel expects the number to go up in coming days.

“Illegal Nepali workers are not well educated. Most of them are clueless about the registration process,” said Kharel.

Nine Nepalis, along with 22 workers from Myanmar, were arrested during one of such clamping operations in the Chandan Raya Industrial Estate, local media reported.

Those found working without valid work permit will be produced before the court and slapped with a minimum of three-month jail term.

After serving the jail term, the illegal workers return their home country if they have a valid passport and money, according to Kharel. Those who cannot return to their home country would then be sent to detention centres where they have to live for six months to one year under poor conditions.

With around 1,500 Nepali already in various detention centres in Malaysia, the recent crackdowns could further spike their numbers.

“We strongly urge those Nepalis working under illegal circumstances to return Nepal,” said Kharel, promising that the embassy would extend them necessary help.

Nepali workers with valid passports and travel fare can return home after getting an ‘Exit Pass’ from the Immigration Department. The pass costs 400 ringgit.

Those without a valid passport can obtain a travel document from the embassy after paying 160 ringgit.

“We help them by issuing a one-way travel document which would enable them to return Nepal after paying for their air tickets,” added Kharel.

The embassy had rescued more than 600 Nepali migrants from various detentions centres last year and repatriated them by arranging required documents and paying for their air tickets.

“Last year, we had a budget of Rs 7 millions for repatriation of the detained Nepali workers who could not pay for their flights,” said Kharel, adding that the embassy is preparing to send back 50 detained Nepali workers by next month. “We have demanded a budget for the purpose also for the new fiscal year. The embassy will try to pay for as many Nepali as the available budget allows.”

How does Saayog work? Everything to know about the food and grocery delivery app
7 months
0 Comment